My English friend Beth and I both tend to have a bad sense of direction, but because the streets are all numbered, we manage to find our way around easily enough. We also don´t often stray far from our comfort zone, so we´ve never been truly lost together. Something we´ve noticed that almost always happens when we are walking somewhere is we find something odd or interesting or just out of place. We´ve found things like people walking on tight ropes next to the road and random parks in the city.

About a week ago, Beth and I decided to go down to the historical district of Bogotá, called La Candelaria, to go check out El Museo del Botero, or the Botero Museum, which is an art museum that holds works of art primarily by the artist Fernando Botero. We went in and out and afterwards decided to walk around La Candelaria since we had a couple hours before dark and we had yet to properly see it on a nice, sunny day (those are hard to come by in Bogotá). We started wandering down the street and as we walked we started noticing that the crowds of people were becoming larger and larger, until we found La Plaza de Bolívar.

Now, normally this plaza was crowded, but you could easily walk around, buy some fruits snacks, hold some pigeons, and see some llamas, but on this day there were thousands(30,000 according to the newspaper the next day) of people that filled the plaza. Can you imagine two extremely fair foreigners( especially in comparison to Colombians) walking into a mass of people when they were merely looking at fruits and flee markets? It was really quite frightening.

At the other end of the plaza was a stage with a screen where a little girl was being broadcasted reading something to the people. I tried to understand what she was saying but her voice was too shrill and the interference on the speakers made it impossible for possibly the only two foreigners in the audience to understand.  I later found out that the gathering was a march to launch a new leftist party in Colombia. 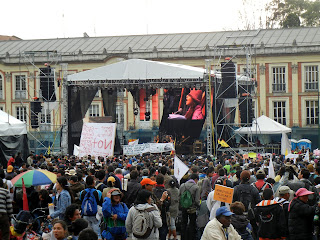 Here is the article on the protest, more photos can be found in the slideshow. You can also check out videos in the Videos tab next to the Slideshow tab up at the top soon if they are not already up :) 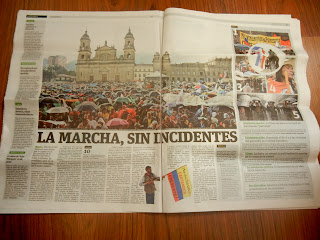 Something interesting to walk into unsuspectingly, right?
:)
Posted by Valerie at 4:39 PM