A  few weeks ago, on one miserable, dismal, rainy day, Bogota held the Theater Festival like it always does every 2 years.  This year Groups from The States, Belgium, Germany, Mexico, Spain, Argentina, Japan, England and others came to perform. I didn't have the chance to see any actual performances,  but i have friends that went and said some were amazing and others not so much. 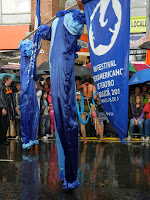 I think this was called the Hungry March Band, based in the States. 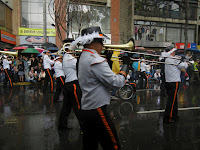 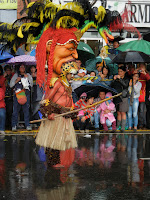 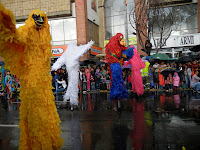 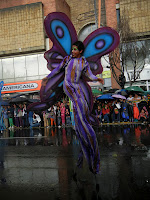 When we were watching the parade there was this horrible guy who wouldn't move his umbrella to let a little girl, about 2 or 3, see what was going on, my friends and I tried the best we could to move for her but didn't help. This is the "Demon" who got our revenge by crushing the guy's umbrella when he leaned forward. 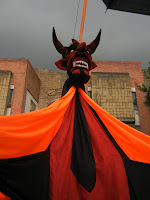 Here's the rest of his crew. 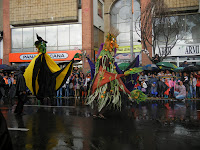 Another group of giants came later and this poor girl here came up to us. 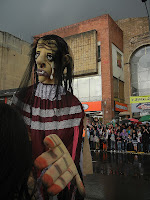 I believe this group was from Mexico, demonstrating traditions for the Dia de los Muertos. I couldn't get a clear picture but if you looked closely at their faces, they were painted like skulls. 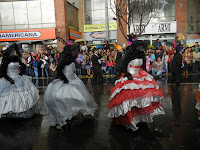 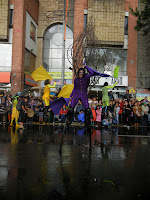 One of my favorites, the Japanese put on an amazing and in sync show. I had a video of them, but i lost the data on my memory card and wasn't able to retrieve this particular video, which i am still disappointed about. 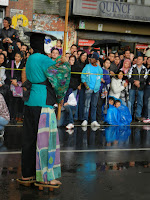 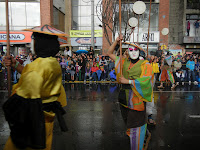 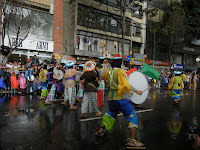 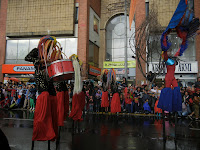 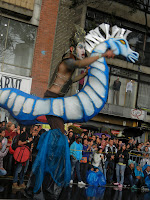 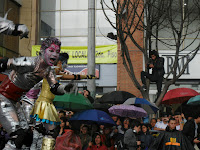 A gigantic puppet, it was quite funny when he got stuck on that orange banner. The puppet masters managed to control the hands and pull the banner up to walk underneath it. Another part of this group was this gigantic and impressive horse puppet. 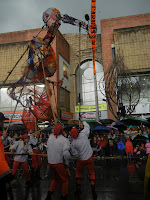 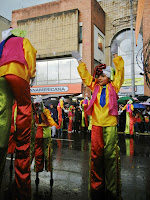 Here are my friends Beth from England and my German friend Chris. This was one of the last times we saw him before he returned to Germany.
See the GIANT man in the back? 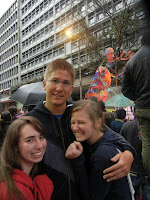 Beth and I before we headed home. By this time we were soaked, freezing, cranky, hungry, and honestly I couldn't feel my toes anymore. But I have to say the Parade was amazing and worth the effort.
:) 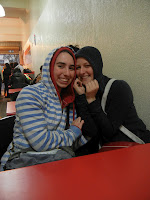